Above: A short walkthrough audio recording of the Torus installation, recorded on-site in Dordolla

Torus is a site-specific installation, developed for Harvest 2017, an arts festival held in Dordolla - a small village nestled in the mountains of Val Aupa, Friuli Venezia Giulia, Northern Italy.

Drawing on Timothy Morton’s theories around ‘dark ecology’ as a means of expressing the "irony, ugliness, and horror" of ecology, the piece attempts to represent the site’s history (and pre-history) as well as its 'ecological entanglement’; moving between human and geological scales.

It was set in a semi-abandoned space, consisting of a house now used to store and dry vegetables and an overgrown yard that at one point housed several colonies of honeybees. Overlooking the location, looms the craggy presence of La Creta Grauzaria.

Each channel plays a loop of different length and represents aspects of time and place. As these loops play, they move in and out of sync, changing the experience at any given time.

Long, earthy drones evoke geological and primordial time spans whilst echoes of the space's agricultural and domestic past move in and out. Political and cultural interference sneak out from behind closed doors. As you move around the piece you move between the human and the ecological, the delicate and the brutal, the minute and the infinite.

Circadian is a 24-minute piece, with each minute representing an hour, to give a sense of a single, otherwise unremarkable day in the world. The piece looks to capture the mundane, melancholic, and sometimes domestic aspects (rather than the sensational, extraordinary or exotic) of everyday life. The piece is a score to the everyday.

The visuals are provided by live, publically accessible domestic CCTV camera footage. The live cameras show agricultural facilities, industrial factories, landscapes, traffic, domestic settings and so on; offering a window into other countries and cultures, in real-time. So for example, the 3rd minute of the piece will draw from a list of cameras in the UTC+3 timezone and so on. Events that occur within each viewing will not be repeated and are therefore unique to the moment observed.

Our experience suggests that when our attention is drawn to CCTV footage it is to witness an ‘incident’, yet in reality, very little happens; however, the real-time nature of the feed means you could at any point be a witness to something extraordinary. The serendipitous aspect of the piece allows each cycle to be different and invites the observer to interpret and extract meaning from each scene dependent on the unique composition of sound and image.

A film version of the piece was also created from scenes recorded over a single day. Read more.

The Circadian film is a day-in-the-life of the world as it passes from night to day and back again across the globe. Although occasionally spectacular or sinister, the everyday is more often mundane and repetitive.

Lucky Me was a proposal for an unrealised gallery installation.

"And I was some of the mud that got to sit up and look around. Lucky me, lucky mud."

Lower Gallery:
Turning from the foot of the stairs, visitors enter a partitioned, brightly lit area - a kind of ma (間), before progressing into a second, darkened space containing a large, circular, knee-high pool of mud. Focused light from a projector above picks out the surface of the pool, revealing something resembling the top of a human head, half-submerged in the centre of the substance. Occasional bubbles from a concealed pump raise potentially unsettling implications and evocations around bathing, drowning, religious ritual etc. Smell and sound are heightened in the dark space, with a low, rumbling sonic landscape from hidden speakers contributing to the immersive experience. 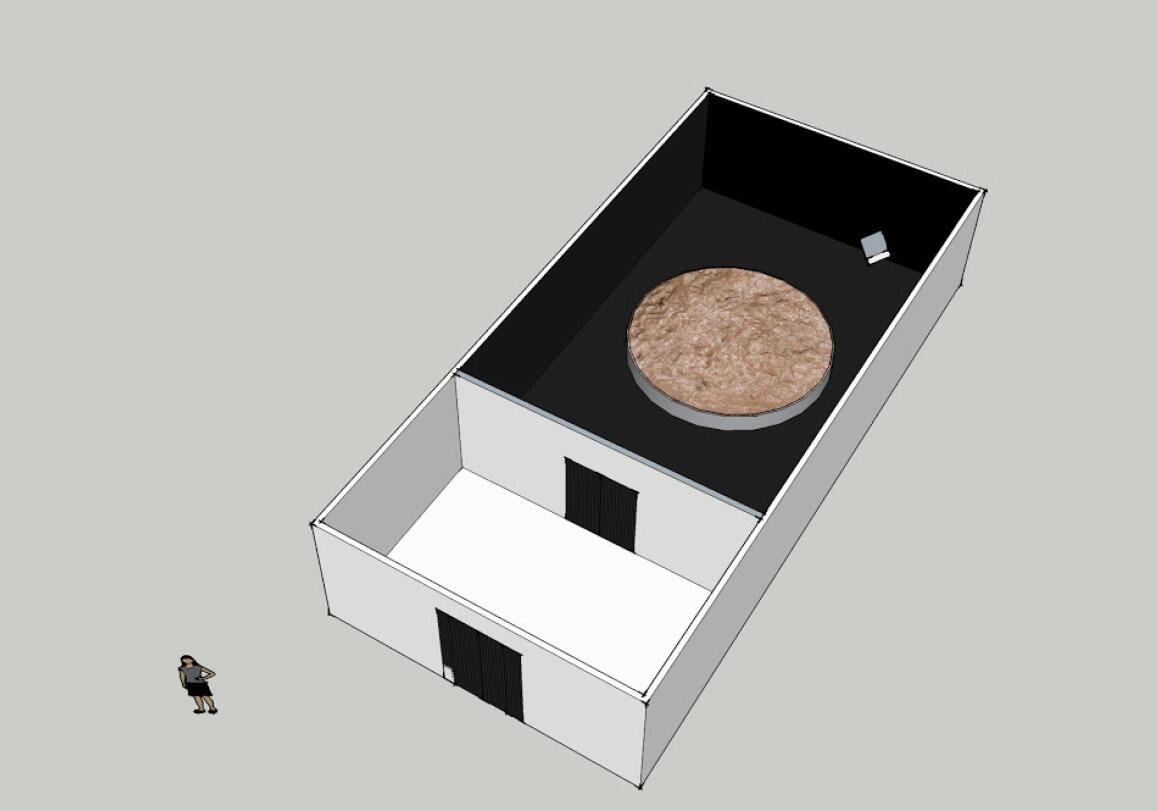 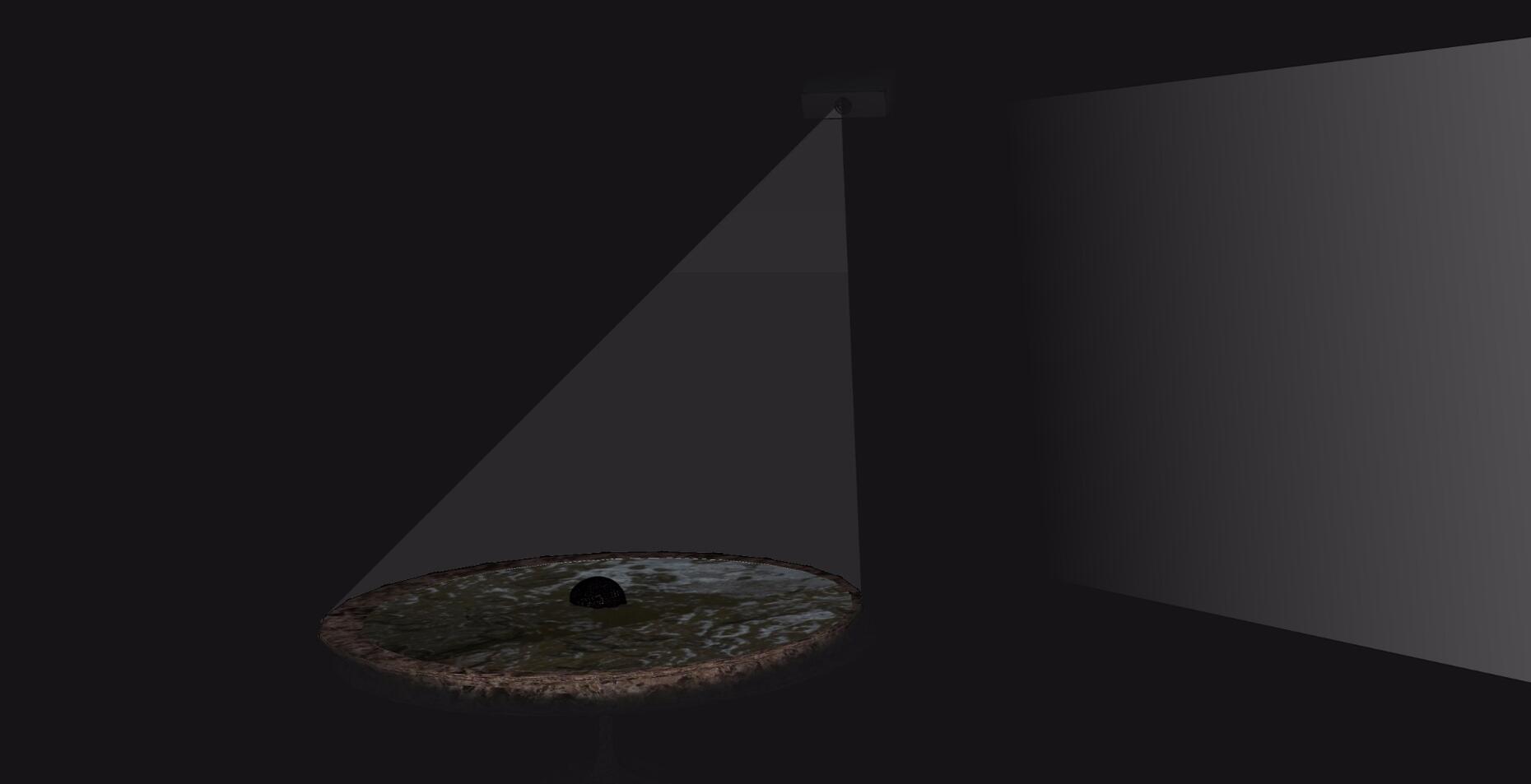 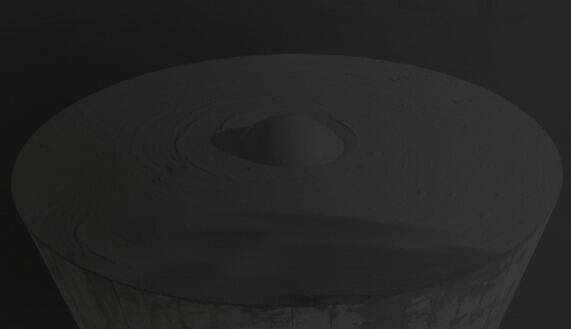 Upper Gallery:
A screen opposite the gallery reception shows an interactive collection/montage of archive films and images exploring mud in ritual, farming, disaster, cinema, art, etc. Via a simple tracking setup, visitors can scrub back and forth through the footage using simple gestures, disrupting conventional linear narratives and creating a fragmented collage that reflects the ambiguous cultural and historical associations of mud.

Double-height Space and Window:
The end windows above the double-height space are coated externally with mud, replenished and altered each day as a living, evolving artwork. Expanding and building on recent paintings exploring scale, gesture and authorship, this piece will also bring the outside of the gallery building into the exhibition space. 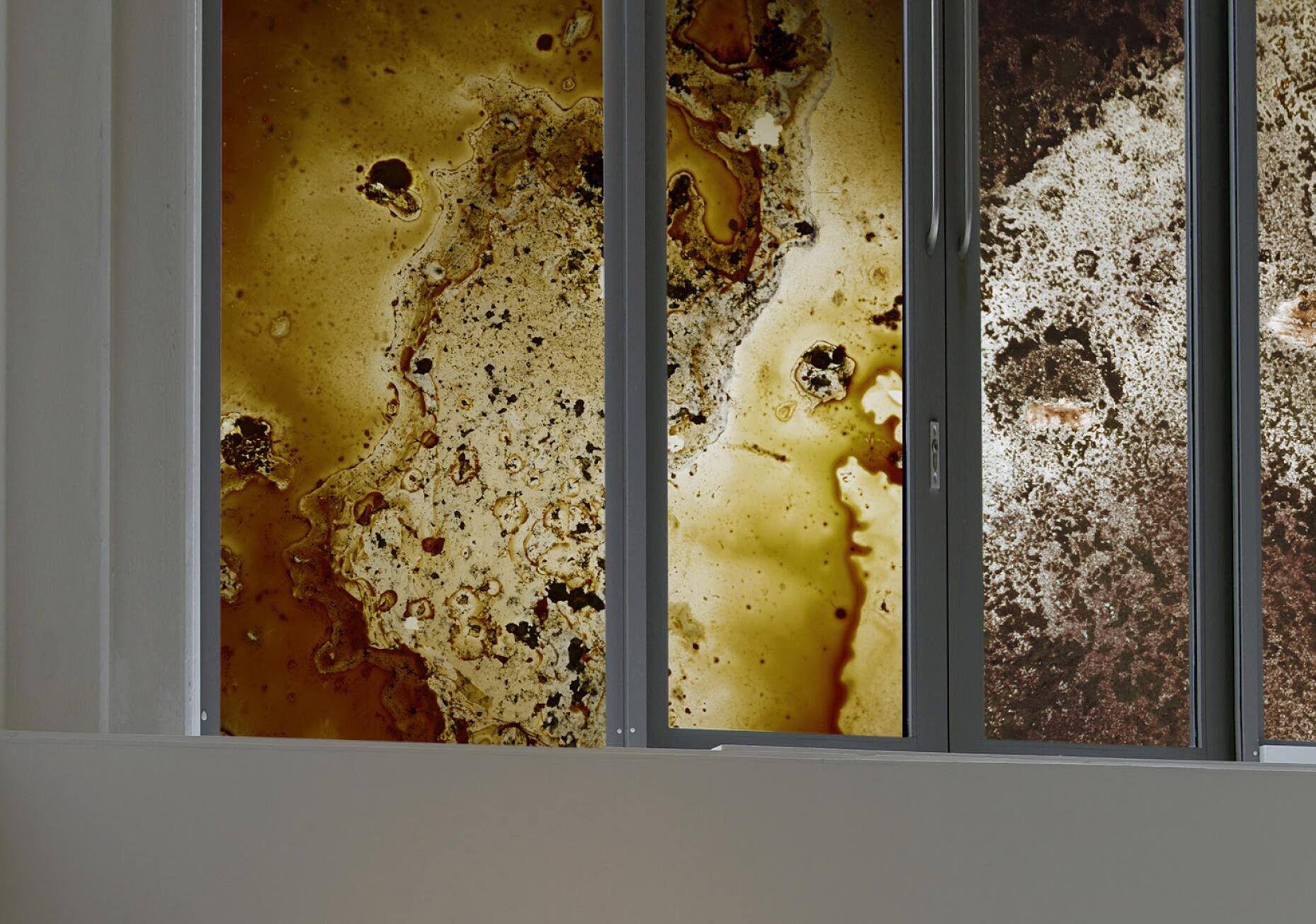 A proposal for a forest installation.

A mud bath to be installed in woodland, housed inside a wireframe structure that alludes to a bathing house. Participants are invited to explore and engage with the space. 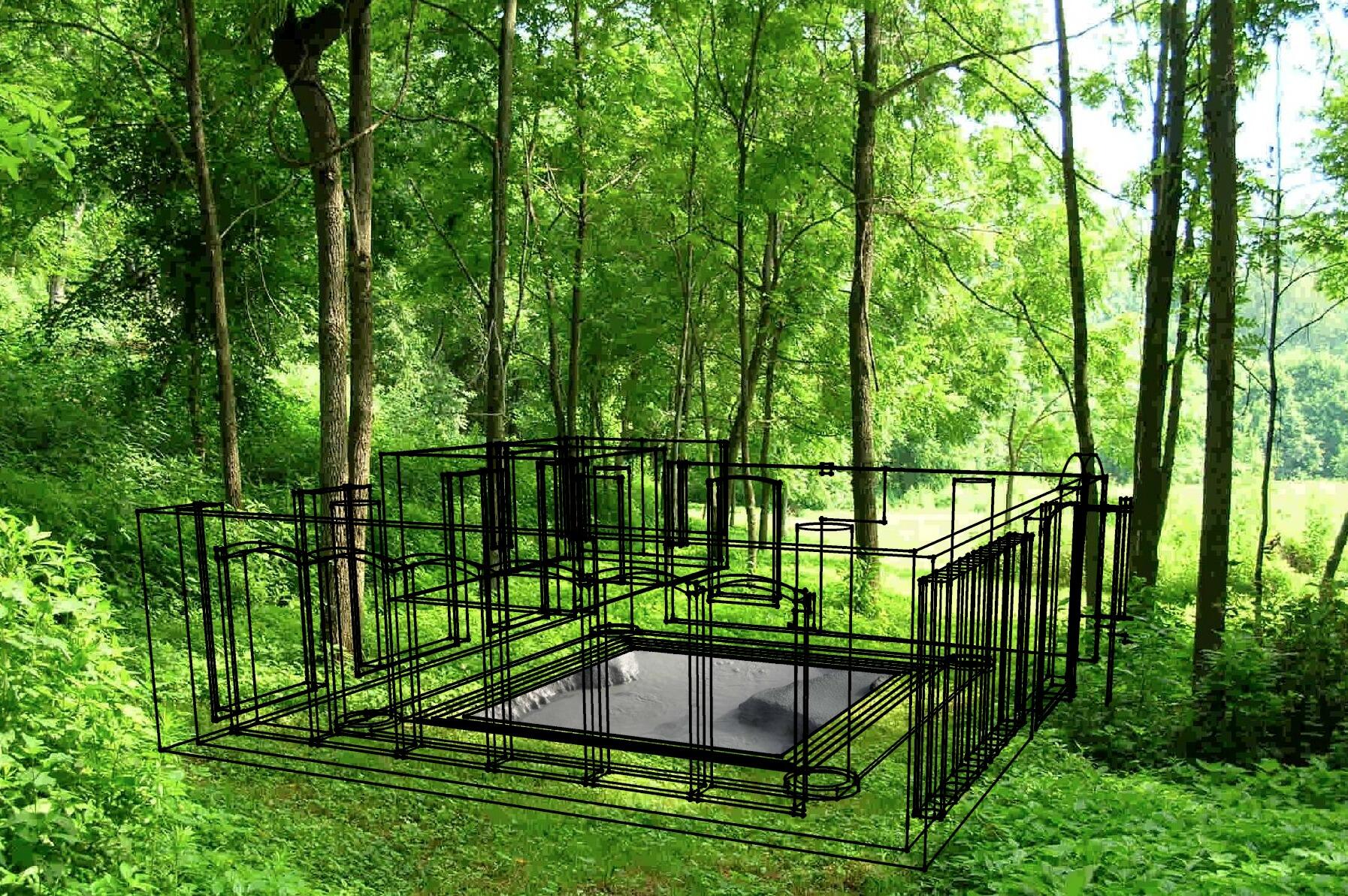 The structure references only the edges of a more traditional building. It is a cartoon line-drawing of a municipal bath made into 3D form – housing the bath inside.

The normal conventions of a building are suggested – a door for entering, a place to disrobe, walls for shelter, showers to clean, but the structure is entirely open. Details are reduced to pictographic forms that form part of the structure itself.

“Baths are almost always rich in metaphorical and symbolic implications… the bath as silly and sublime, designed and undesigned” – Leonard Koren: Undesigning the Bath

Mud occupies a liminal space between positive and negative, dangerous and restorative, holy and godless, repugnant and sensual, life and death. Meanings are imprinted onto it from religious traditions, prehistoric paintings, film nostalgia, health and cosmetics, agriculture, natural disasters, exploration and engineering. In mud all humans become the same. In WW1, the disappearance of the visual horizon of one’s body to the mud became the defining traumas in Sassoon’s narratives. Yet mud also provides hope. A living, organic material, composed of both earth and water. It’s rich minerals have forever been used to heal and soothe. Natural, yet sinful. Spiritual, yet corporeal.

The structure creates a literal and figurative frame for this liminality; a void with an edge to it, enclosed yet exposed.

The installation should create a layered experience: One as a viewer, perhaps unexpectedly coming across it in the forest. The frame drawing you into this now rarified spot, inconspicuous under normal circumstances. Another is as an observer of someone else in the space. Why are they there? Will they get into the mud? Yet another is as a person within the space. You have entered into a ritualised site. How will you move through the space? Will you stop and submerge yourself into the bath or pass through untouched?

‘Oumuamua, the first known interstellar object to pass through our solar system, moves past the earth, cold to the existential crisis facing the planet’s inhabitants. The scout from afar is strange, as are we. In fact, as we race to understand more, we become even stranger, as do the objects and phenomena we encounter. The pursuit of understanding and technological advancement has led to what many consider to be a new epoch in the history of our planet - the Anthropocene - a period defined by the geological impact of humans, perhaps most clearly demonstrated by global warming and its consequences.

That Sinking Feeling seeks to reflect the relationship we have with our current predicament, the artefacts we create in our pursuit of progress, imagined futures (that may or may not contain us) and the complex emotional state we find ourselves in. 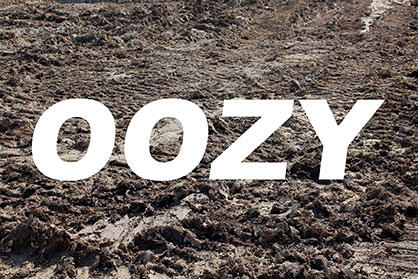 ARM invites audiences into an audio-visual performance with references to theatre, installation, sound and cinema. The piece is concerned with what it feels like to be living through a period of intensifying alienation, and the tangled emotional states we find ourselves in.

ARM is a UK-based, cross-disciplinary arts practice comprising sound-artist and composer Navid Asghari, experience designer David Rogerson and artist and curator James Moss. They create environments that reflect on the feelings of facing up to a world that is rapidly changing (or at least revealing itself), at many different scales.

Part of the Interruptions programme of free events at the Holden Gallery.

Navid Asghari
Sound Artist and Composer for film and TV including BAFTA winning short The Operator and BAFTA nominated Murdered by My Boyfriend.